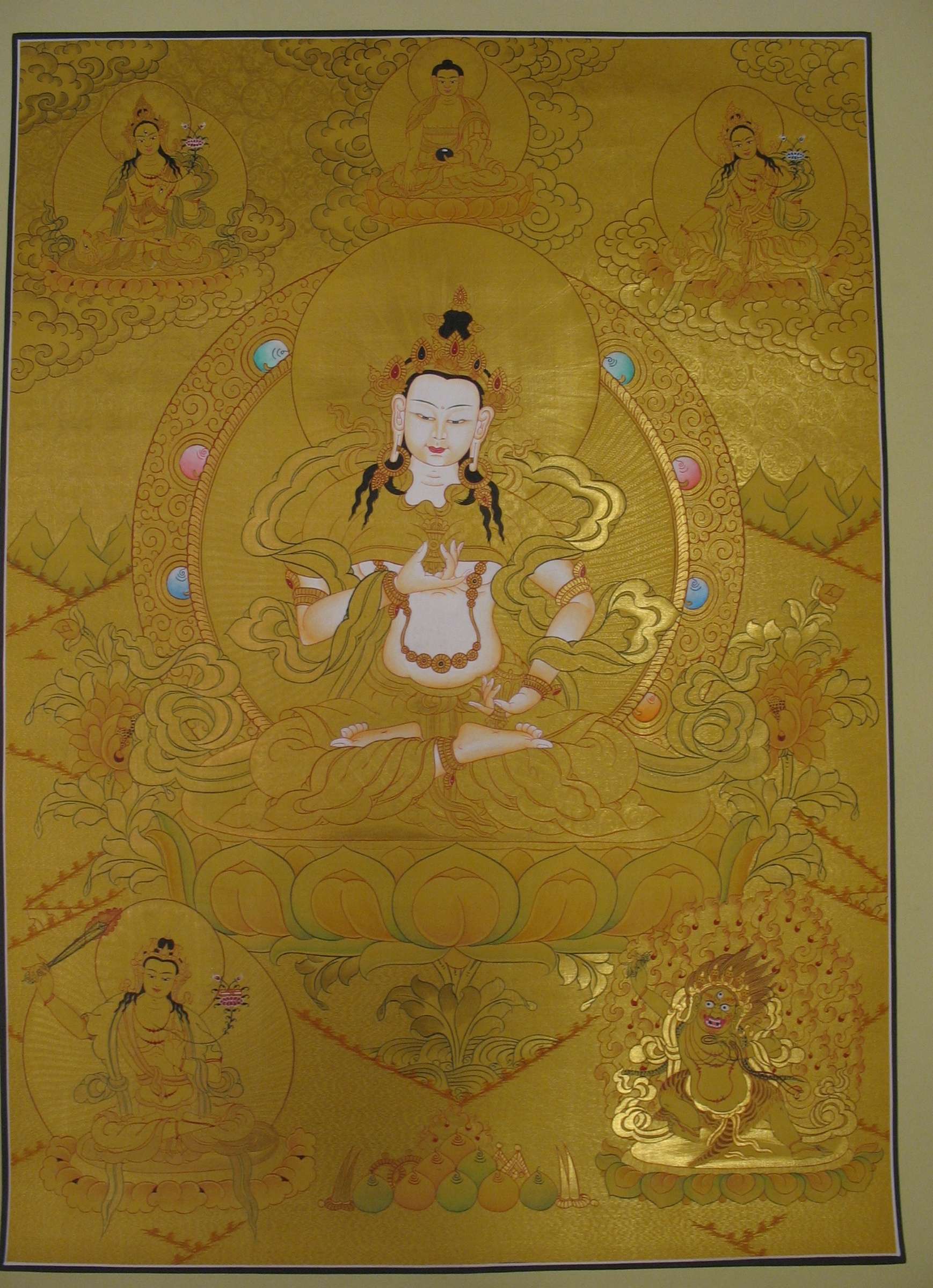 Vajrasattva with Manjushree thangka is handpainted in Nepal by using traditional Color. Vajrasattva is the archetype deity.

Vajrasattva with Manjushree thangka is handpainted in Nepal by using traditional Color. Vajrasattva is the archetype deity.  He is supplicated in the special yoga of repentance that employs his well-known hundred syllable mantra.

Vajrasattva is said to have been originated from the seed syllable Hum and is generally invoked for removal of obscuration of Kleshavarana and Jneya Avarana.

Oṃ. Vajrasattva, keep your Samaya. As Vajrasattva, remain near me. Be steadfast towards me. Be very pleased with me.  Be completely satisfied with me. Be loving to me. Grant me all accomplishments. In all actions, make me mind pure and virtuous. Hūṃ. Ha ha ha ha hoḥ. O Blessed One, Vajra-nature of all the Tathagatas, do not abandon me. Be of vajra-nature, O great Samaya-being, aḥ.

3 Manjushree are presented at the top right, top left and bottom left corner of the thangka. Manjushree is the Bodhisattva who holds the flaming sword of enlightenment, by his left hand in a warning hand gesture in the left hand representing his realization of wisdom to cut through ignorance & wrong view. His right hand depicted in teaching holds the stem of a Blue Lotus flower upon which rests the Book (Pustaka) of Perfection of Transcendental Wisdom.

The mantra of Manjushree is Om A Ra Pa Ca Na Dhih.

Vajrapani is presented at the bottom right corner of the Vajrasattva in the thangka. Vajrapaṇi is one of the earliest bodhisattvas of Mahayana Buddhism. He is the protector and guide of the Buddha and rose to symbolize the Buddha’s power.

Vajrapani is pictured dancing wildly within a halo of flames which represents transformation.
He holds a vajra (thunderbolt) in his right hand which emphasizes the power to cut through the darkness of delusion. Vajrapani looks wrathful, but as a representation of the enlightened mind. He is completely free from hatred.

The mantra of Vajrapani is om vajrapani hum phat.

Shakyamuni Buddha is presented at the top of the Vajrasattva in the thangka. His left hand is in the lap holding a begging bowl while the right arm is extended across the leg with the fingers touching the earth.

His skin is golden in color, the eyes partially closed and the hair piled with a gold ornament adorning the top of the head.

A dot (bindi or “urna”) between the eyebrows and the earlobes are elongated and pierced.
The shoulders are covered with an orange and red robe wrapped around the torso and legs and tied at the waist with a green sash.